Growing up in London, I was an avid reader of Time Out; a bible for both film listings and live gig recommendations.

Even though I relied on the weekly music press for album reviews and music articles, the Time Out music editor John Gill was amazing for highlighting more experimental and boundary pushing stuff like Test Dept and Cabaret Voltaire. A genre he particularly championed was ‘systems’ music, which wasn’t covered in the rock press as it veered towards contemporary classical and experimental composition.

American minimalist composers Philip Glass, Terry Riley and Steve Reich had been experimenting with repetition through the Seventies, but the style perked the interest of British composers, not least Michael Nyman, who had already released an album of minimalist music on Brian Eno’s Obscure label and started composing soundtracks for the short films of Peter Greenaway in the mid ‘70s. Nyman’s first feature score ended up being for Greenaway’s The Falls in 1980, and much of this music ended up on his landmark self-titled album, Michael Nyman. 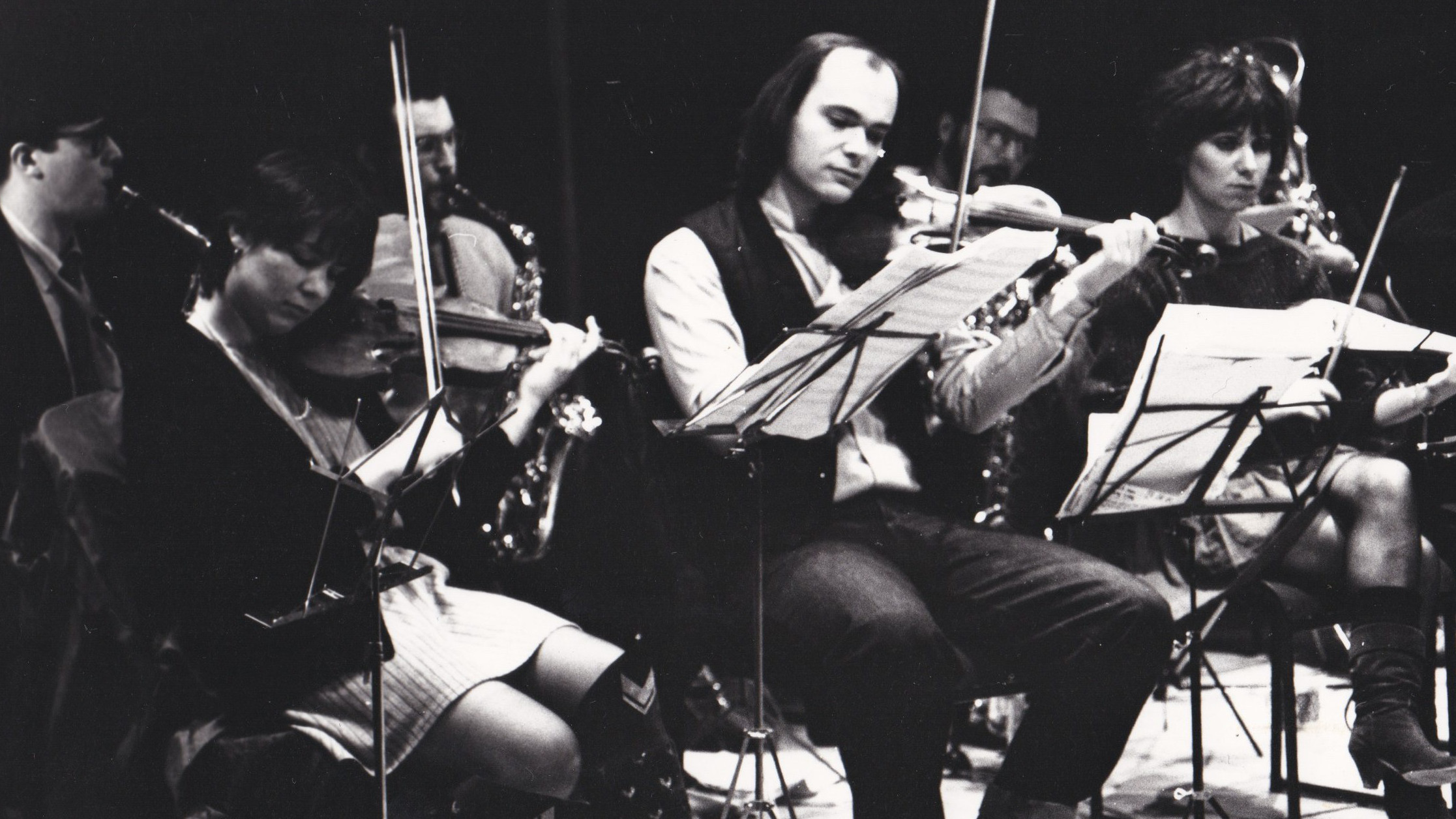 As the new decade began, other young composers started looking to Glass, Reich and Nyman for inspiration, particularly Andrew Poppy, Simon Limbrick, Shaun Tozer and Orlando Gough, who helped to form what was officially known as The Lost Jockey Music Co-Operative Ltd, or The Lost Jockey for short.

The band was a rolling group of around 25 musicians, which made recording and touring difficult, but not impossible; I saw the band at the Almeida Theatre in Islington and it was a powerful assault on the senses. Elsewhere in the Netherlands, composer Wim Mertens formed Soft Verdict to create a breed of systems music that was more melodically gentle in style, whilst Nyman continued to create systems based scores for Greenaway features and perform live with his own ensemble band.

I had started doing photography at this time and was doing a lot of live gig photos, but thought that shooting rehearsals would be an exciting proposition and approached both Lost Jockey and Nyman with success! The photos here were shot at Michael Nyman Band rehearsals at the Donmar Warehouse Theatre and The Lost Jockey performance at the GLC Peace Festival in Victoria Park. 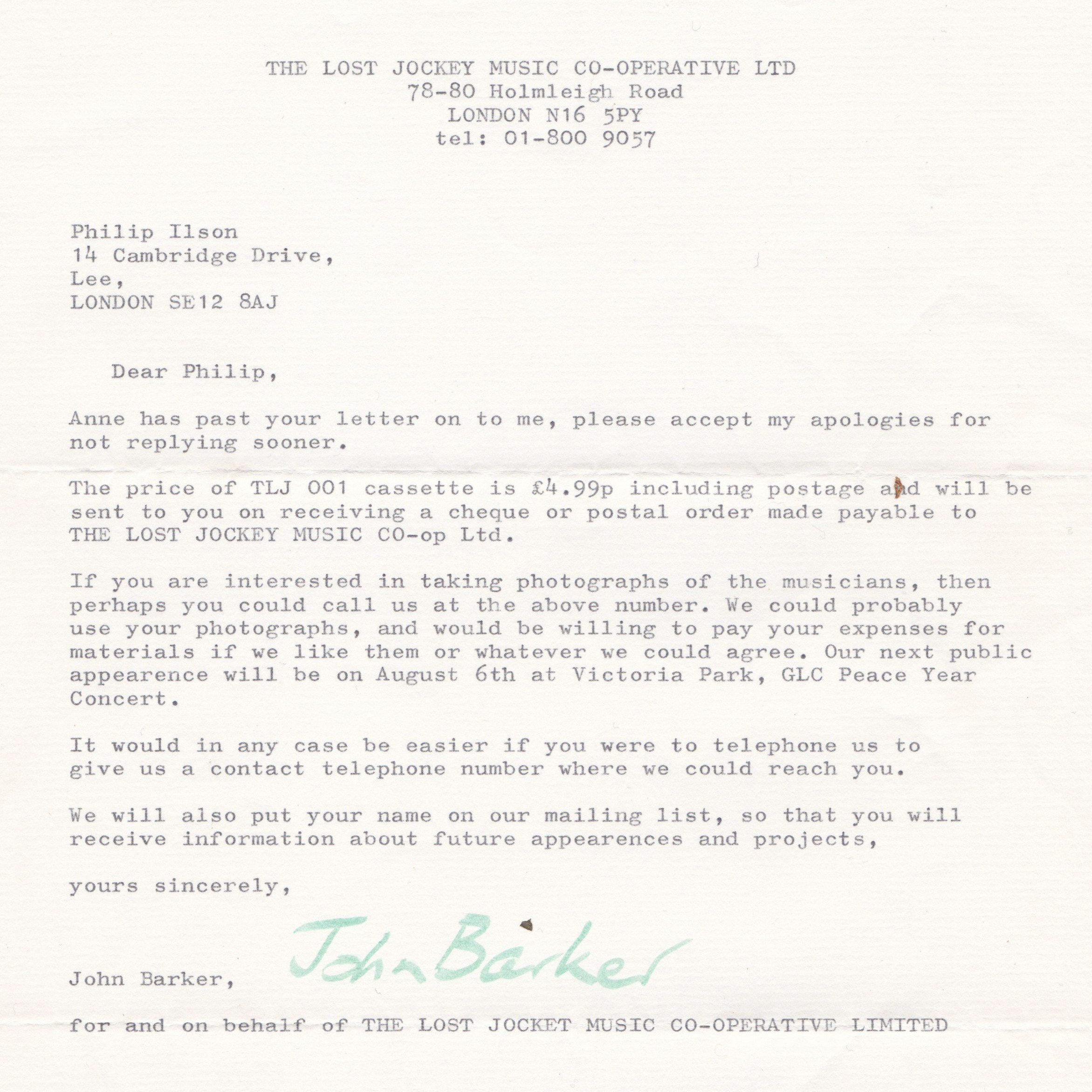 Philip Ilson writes to Lost Jockey to ask if he can photograph them!

But the scene wasn’t to last. Of course, Nyman went on to Oscar success (with his score for The Piano) and beyond, and Wim Mertens reverted back to being a solo composer. The Lost Jockey were unsustainable as a ensemble; they downgraded to a smaller group playing more conventional jazz-rock, called Man Jumping, but things fizzled out. Many of the composers and musicians involved in the band are very much working today, in TV theme composition and writing and performing works, as well as tutoring, but I have made it personal project to revive what I consider some of this lost music. Nyman and Mertens early work isn’t that difficult to access but The Lost Jockey are harder to seek out beyond a few recordings uploaded to YouTube. 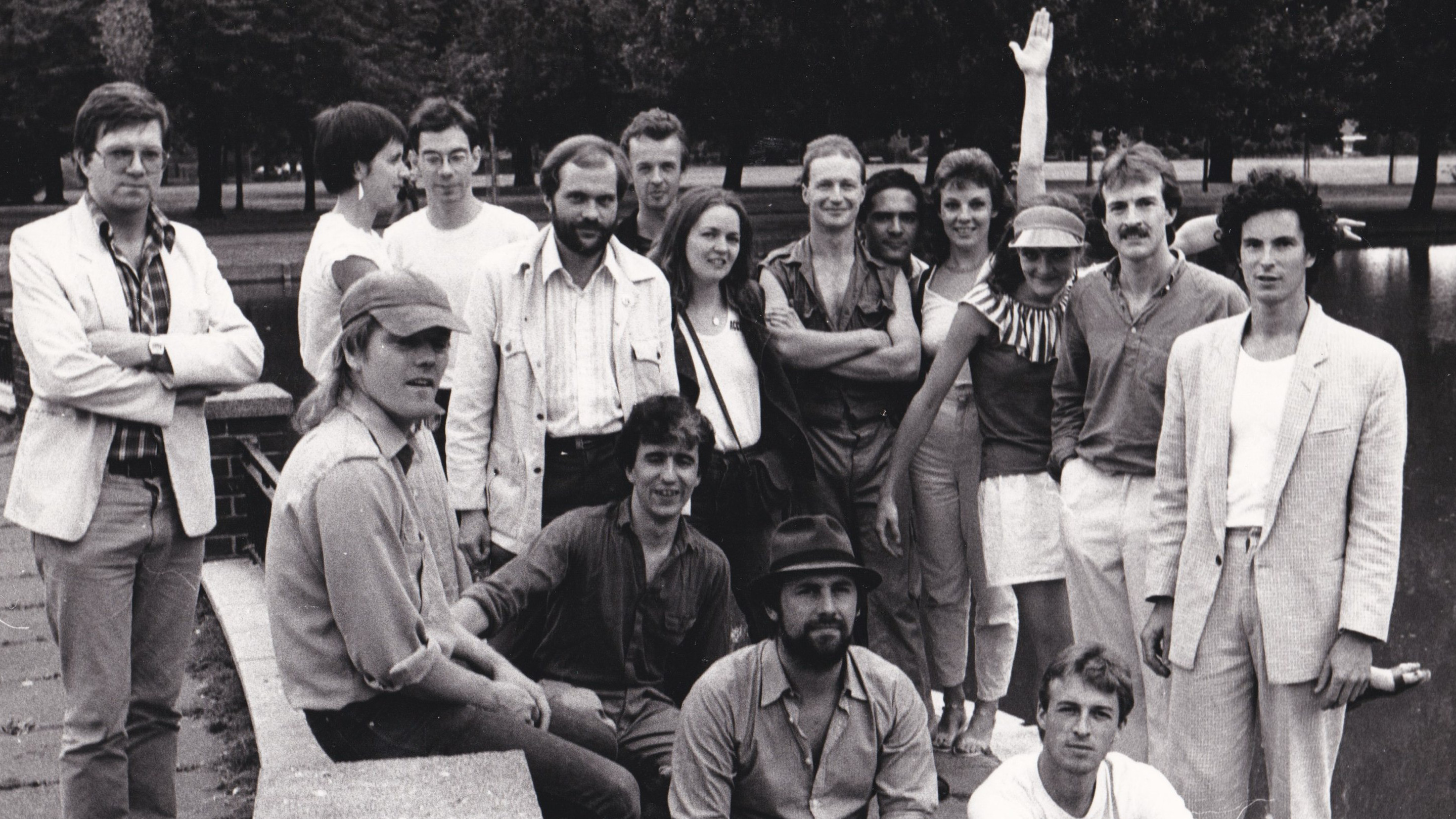 A Lost Jockey group shot between rehearsals, by Philip Ilson.

Early in 2019 I approached an old friend who works at Trinity Laban and she put me in touch with tutor and C-Lab organiser there, Joe Townsend, to set up a meeting. He mentioned that various Lost Jockey members had come through the college as tutors. Around the same time I got in touch with composer Jasmin Kent Rodgman, and from these meetings, the event known as Walls Come Tumbling Down started to come together. Trinity came on board to supply student musicians for an ensemble whilst Jasmin got to work on seeking out the available scores, as well as bringing in a conductor in the form of Laura Jurd, a Mercury Prize nominated artiste for her band Dinosaur.

Given the political climate in London during the era of systems music, where the radical left was fighting the right wing government lead by Thatcher (does anything change?), we’ve also joined forces with the London Community Video Archive to screen some of the archive works produced by community filmmaking groups of the ‘80s, including Four Corners, Albany Video and the Basement Project, as a backdrop to the live performances on the night.