Short Thoughts: A Review Of DELIAPHONIC, 5.5.18

Our Creative Director Philip Ilson reviews Deliaphonic​, returning to electronic music pioneer Delia Derbyshire's hometown for a tribute to her life and legacy.

“This last weekend, I was intrigued enough to take myself to Coventry for a celebration of the would’ve been birthday of Delia Derbyshire, the co-founder of the BBC Radiophonic Workshop, composer of the Dr Who theme and “unsung heroine of British electronic music.” Derbyshire sadly passed away in 2001 and this is the second Deliaphonic event to mark her legacy, this year at Coventry’s historic St John The Baptist Church.

Filmmaker Ian Helliwell started the night with a live set of squelchy analogue sounds and rhythms backed by a visual feast of video feedback, all shimmering colours and echoed abstract imagery in that distinctively retro Radiophonic ilk.

Next up, Ayse Hassan (of Savages and Kite Base) performed a synth solo set as Eysa. Mixing slinky electronica into instrumental and more lyrically led numbers, close in style to the more commercial end of Chris & Cosey, the music created a warmth within the cold stone of our 14th Century surroundings. She was accompanied by a visual mix of self-portraiture, shot live as she was performing, weaving abstract shapes with colour. 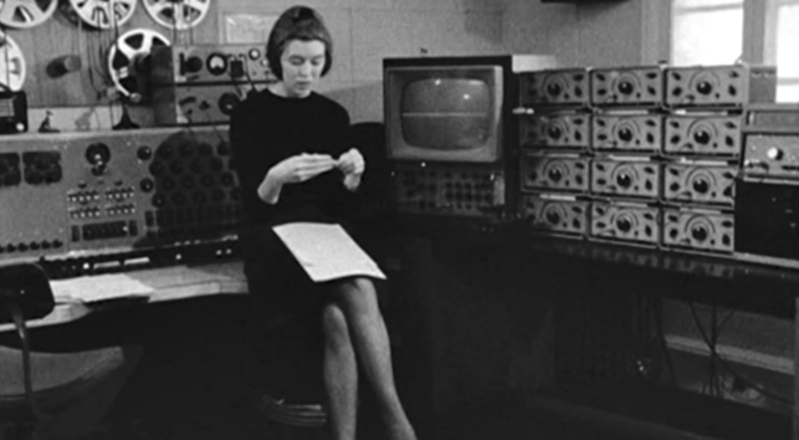 The final act was the Delia Derbyshire selling point - but sadly the biggest disappointment and I felt, the farthest from the Delia legacy.

White Noise in its 2018 manifestation, the final band to perform of the evening, is Vorhaus and a mate performing a strange mix of muso jazz-funk with an artillery of hi-tech digital equipment - including a leather glove with sensors operating a laptop and a strange lit-up sitar being used for high speed solo runs up and down its frets. There were no visuals for this set so the screen has the monochrome face of Derbyshire from the event’s poster looming in high contrast down at its two musicians, one might’ve interpreted as a little vexed.

Though I understand that the Workshop and Derbyshire’s experiments were all about using the absolute latest in technology’s innovations and so those musicians like Vorhaus, still active, would want to keep that forward thinking alive, I can’t help being a little nostalgic for, well, nostalgia.