Filmmaker Kamal Aljfari responds to his own work and making art under occupation in this collection of essays.

Curator Faye Harvey has brought together essays from six activists, writers and filmmakers in response to the work of Kamal Aljfari - screening this Sunday 19 January at Regent Street Cinema with Aljfari in conversation - and the ongoing colonial violence within Palestine.

Conceived in the spirit of solidarity and resistance, this collection forms the zine of the same name Recollective Resistance, which you can read in full here. The below is an excerpt from the zine from Aljfari, responding to his own work and the imperative of making art in Palestine.

RECOLLECTION A film by Kamal Aljfari

It’s not a film from there. He is dreaming; and, in his dream, he is filming. The someone filming is returning to Jaffa, as he might to any catastrophised place. He knows some places; perhaps even some people. Perhaps everything. He is myself, my grandfather who was on his way to Beirut and returned because there was a storm; a photographer, a composite of every figure in the margins.

Memory itself, filming; the memory of all the background it rescues from the screen.

We hear his footfall. Later, he begins to hear voices. He sees: where the quarter on the sea used to be, the life buried there speaking to itself. Or overhearing, no wiser than we as to where snatches of voices or music are coming from. It is the sound after catastrophe, nothing more. Yet it sounds, still. At times he loses himself. He hears the rain, but doesn’t see it. He is jetlagged, by some 70 years: a jetlag he will never overcome, nor will anyone. But: in time. When he arrives from the port, he is walking around, filming the way he’s filming — filming everything— because he knows that none of this exists.

This character has the ability to film the past. He is the ability of cinema to dissolve borders, to re-collect, to recreate a city, to tease out life. The origin of photography.

I removed the Israeli actors simply because they stood in my way —technically speaking. They cannot both be there and allow me to focus on my subject: that would be another’s film.

The subjects of this film smuggled themselves into the image that didn’t want them to be there; into films whose point was to make them not be there. There they are.

They have stories, eventually; the moment when you realize that the ghost is not a ghost. 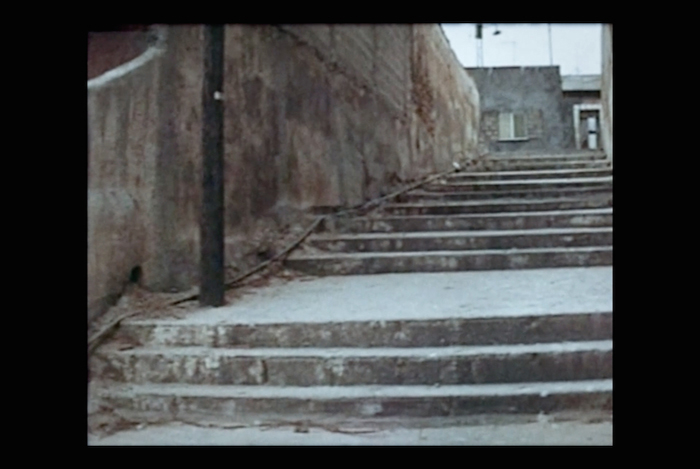 It’s not a film from there. It is a post-catastrophe film, a Sebaldian film, what this image requires to be freed from its mooring in Palestine. A film about any of the ruined cities: Aleppo, Detroit. Berlin, where one can live now. Let it be any catastrophized place: any place where fiction films were shot, and where the camera ate the place that it shot, alive.

They were there, waiting for me to film them all these years. The first sign of life: a line: electricity; washing. A car. The someone does other things. Why does he slide into photography? I suppose the importance of what’s he’s doing begins to dawn upon him. He takes pictures to freeze time. He walks over the ruins, as he might over the ruins of any other “natural” destruction of our time. 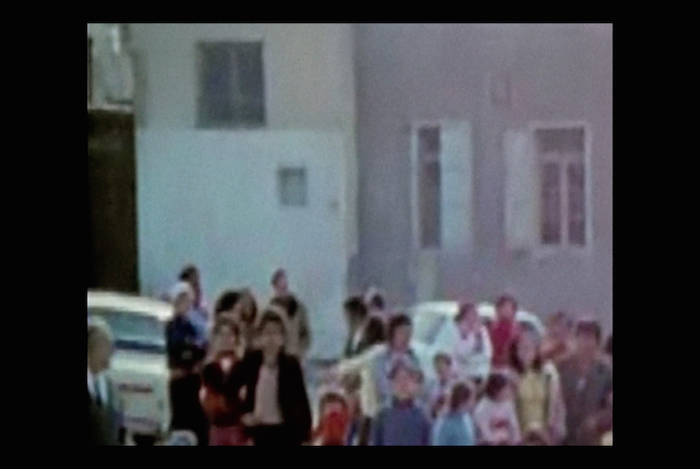 So the fact that I removed the actors is very minor. It is not the subject of the film. Not even close. That’s why he’s having this dream: the absence of what I absented is not even noticeable. It is entirely beside the point. This film is about us, all of us margins —not them. Even to the end credits. He’s having his own dream. 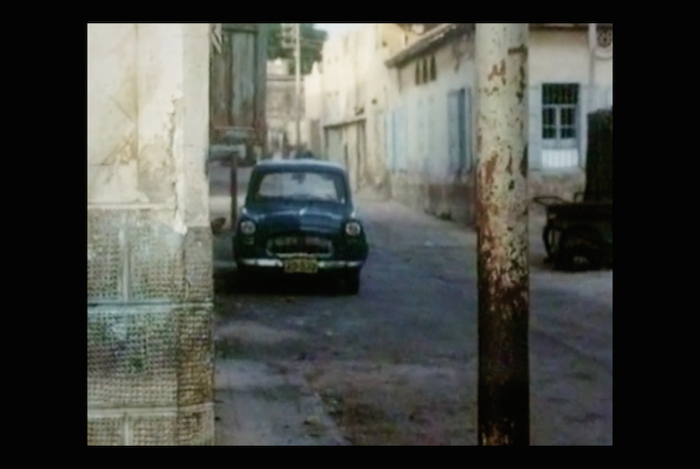 Why would filmmakers persist in filming Jaffa and not Tel Aviv, their icon of modernity, even in the ’70s? To re-collect the Jaffa as backdrop of these films, I had to watch almost every film of the period. For them to have shot Tel Aviv would have been to acknowledge the unthinkable of their imaginary: “we are new here.”

Film needed Jaffa to make the point that Israelis have a history there, too. But they could only show it as they left it: ruined, neglected, abandoned, destroyed—and with not a word on how or why it came to be that way. Their actors walked down the street and past the dreadful ruins. As if nothing had happened; as if the streets had always looked that way.

The city was gradually torn down by the Tel Aviv municipality: thousands of houses, decade on decade, ongoing to this day. And yet: I found everything I needed in these films to re-narrate the city —down to my own uncle wandering, out of focus, across the background of a scene of Jaffa (2009). The Manshiyya neighbourhood, where my grandparents were raised, was entirely bulldozed, now replaced by a grassy seaside promenade. When I first came across the 1962 B-movie featuring it as backdrop, I felt stunned to be able to wander it onscreen.

I had nearly finished editing this film when I made a final discovery, that became the last element I appropriated for this project; the last piece of the collage in this re-collection. An early 1970s propaganda film, a quasi-documentary on David Ben-Gurion, Israel’s iconic “founding father”: BG Remembers. My father was ill. I returned to see him, and this film came on the TV. Like most of the fiction films shot in Jaffa, it begins with the arrival at the port, from the sea to the old city, over four minutes of credits.

I removed Ben-Gurion from the image. He didn’t want to be there. He says as much in the film: “They wanted me to stay in Jaffa a couple of days. But I told them: no. Jaffa is worse than Plonsk,” his birthplace in Poland, of whose Jewish experience his Israel was to be the negation. “I’m going to Petakh Tikva,” the first Zionist colony in Palestine. So, in a way: I did him a favor.

As we watched the film, my father said something like: “67 years. The longer you live: the more you count.” A month later, he was gone. 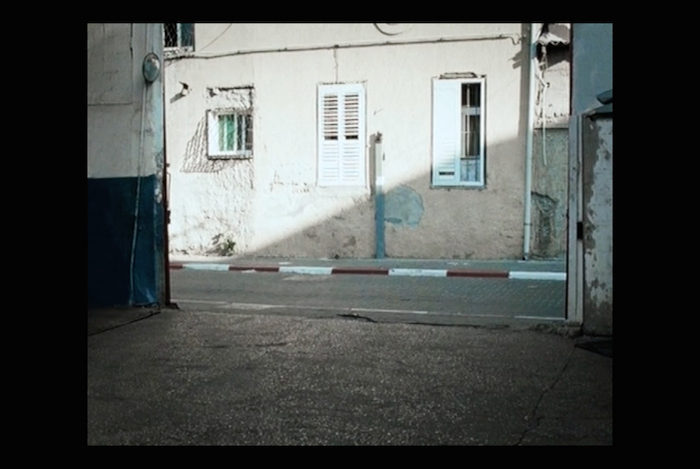 I spent many years collecting the Israeli and American fiction films shot in Jaffa, most of them the so-called Israeli “Burekas Films” on the impossible Ashkenazi/Mizrahi (“Western”/ “Oriental”) relationship in Israel’s first decades. Jaffa is overwhelmingly the most present set for these.

They are, ironically, the only films to document the city before its destruction —even while they were the actors of its destruction, film after film, box-office hits molding not only the Israeli, but also the US imaginary.

Now, I’m glad they were made: they are what allowed me to make my own film. Without them, mine couldn’t exist: the city that no longer exists would not exist even as image.

The process is not about claiming: reclamation can be territorial. This is not that kind of claim; not a national film. It aspires to lay claim to a cinematic territory, not a country. To reset, not the thing lost —but the image of it.

I felt as if I was being told what I should do. It would have felt wrong to overlay my own memories or voice over the image. These are memories of images so endless that I had to keep them unmoored, to respect the film’s relation to language. So: a city narrating itself. In the background, those who are not, who could not be, the subject of any film, condemned to be the background to the films of others.

I removed the actors because they stood in the way of the city, of the background that composes it. They were blocking the background. They are not the subject of this camera. Its holder films everything he encounters, reawakening all the ghosts-that-are-not-ghosts, ineradicably present in the margins: who were, in every sense, always there. Towards the end, the camera even lets them march together, as if they had all gathered together to arrive to the foreground. Not to return: to arrive, where they always were.