Forget the Academy Awards, here's what you need to know about LSFF's International Competition.

“Since initiating the International programme four years ago, the scope and ambition of the selection has grown year on year. In 2018 we received 1600 international submissions, which has grown from 300 in the first year - the process of distilling those down to the 21 competition films (and 18 non competition films) was an exciting, tedious, inspirational and maddening six month process, a feat I by no means could do alone (nor should I). The four screenings we’ve put together for the international competition couldn’t have been completed if not for the dedication and hard work of my selection committee - Joshua (Japanese Avant-Garde and Experimental Film Festival), Christine (Four by Three Magazine) and Jenna (London Short Film Festival).

So why this selection in particular? Why these 21 films and not any of the 90-110 that we had shortlisted for competition?

It’s a tricky question to answer with any certainty. Numerous holistic factors play into the process: a desire to create a programme that’s truly international, which tries to break away from dominant euro-centric programming (this year we have films from India, Argentina, Colombia and Thailand) and offer a diversity of form and aesthetic. I hope to present you with films that are distinct from one another, that each one offers a unique and vital engagement with short form filmmaking. One of the pleasures of attending the Berlinale each year is the deliberate and considered programming of Maike Mia Hölne’s Berlinale Shorts selection, which is a beautifully calibrated balance of styles and approaches that rarely, if ever, repeat themselves and hopefully we’ve gone a little way to achieving that ourselves.

Here’s a small selection of films that hopefully highlights the breadth and scope of what the international programme has to offer:

Influenced by Dante’s Inferno and visually drawing on the works of Bosch, Goya, Bruegel and Darger, Boris Labbé’s hypnotic and thrillingly violent The Fall imagines a world caught in flux between creation and destruction as the oppositional powers of both heaven and hell are chaotically forced into being. As with his previous work, Labbe is concerned with cycles and loops and the movement from the micro to the macro. Here hundreds of micro narratives cyclically repeat, structures rise up and then melt away, creatures are born only to be slaughtered seconds later. It’s a powerfully compelling effect. A constant, unstoppable churning of life moving into death, that combines 4000 original hand drawn watercolour and Indian ink images and a thrillingly loud and dissonant string and brass score from Italian composer Daniele Ghisi.

Crash-test techno jitterbugging. In three delirious minutes, Nikita Daikur’s Fest encapsulates the dumb abandon and nihilistic violence of a world gleefully racing towards itself own moronic demise. On the other hand This Magnificent Cake! by Marc James Roels & Emma De Swaef is an animation of gorgeous sweeping ambition. At 44 minutes it’s the longest film in competition but it’s anthology structure keeps proceedings at a surprisingly brisk pace. Taking its title from King Leopold II’s assertion that he did not ‘want to miss a good chance of getting us a slice of this magnificent African cake’, the film is a disarmingly comic and at times surreal retelling of Belgium’s colonIsation of the Congo Basin. Reality and illusion subtly merge at the edges, as the lives of kings, army deserters, hotel waiters and corrupt businessmen collide in a destabilised fever-dream of madness, tragedy and crushed innocence. 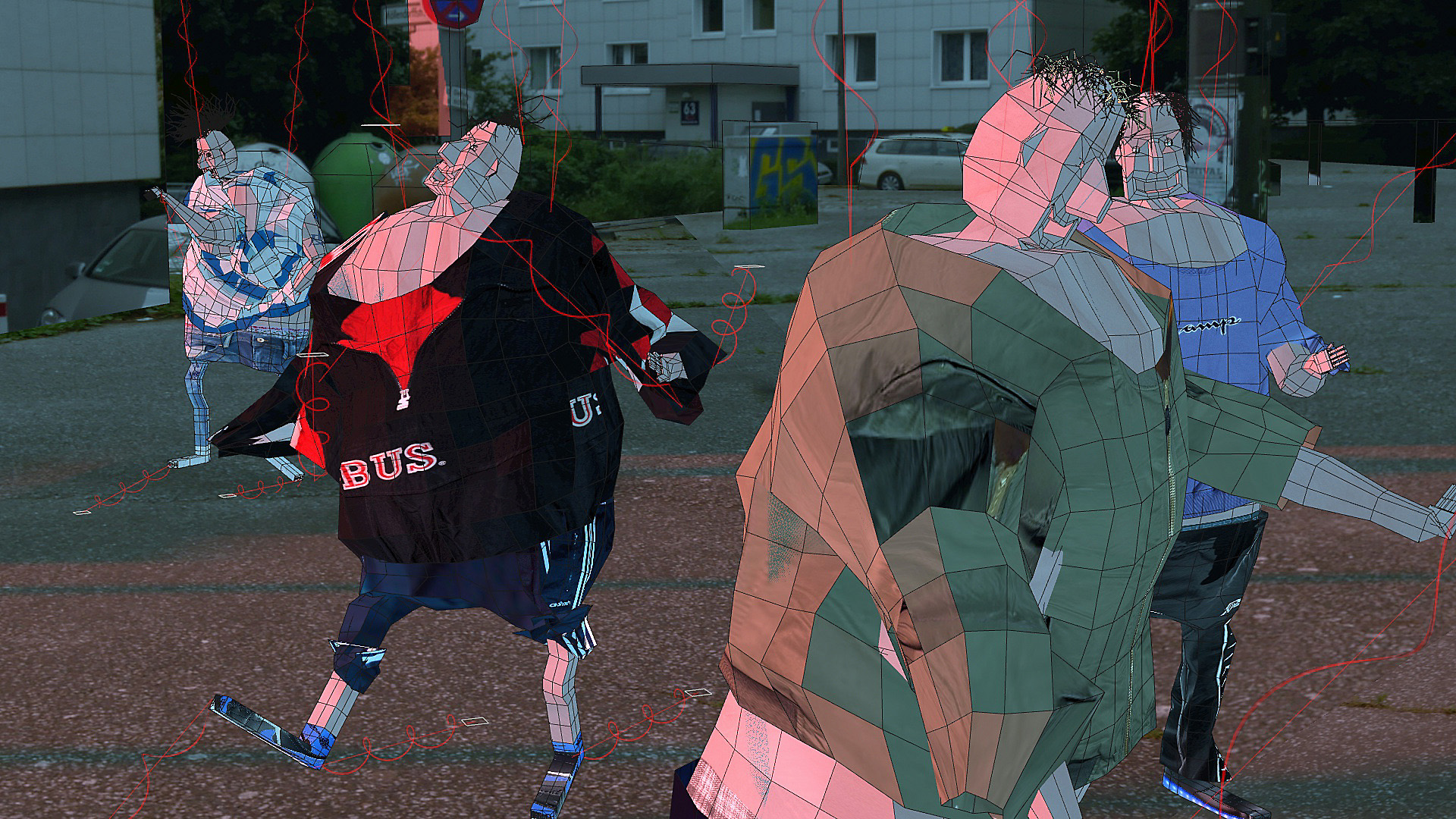 As an associate member of Magnum Photos you’d be forgiven for assuming that Sohrab Hura’s The Lost Head and the Bird would conform to more conventional ideas of reportage, and although the bulk of the film’s content is taken from his own still photography, his presentation of it is grippingly unconventional. Initially influenced by India’s growing ‘rabid nationalism’ and a ‘vitriolic socio-political landscape’ Hura took to documenting India’s coastline, a space that ‘was always about the edge, the periphery, the margins, a sort of a tipping point.’

What erupts out these static images is a disorienting and terrifyingly hallucinatory vision of contemporary India. Two images are presented on screen which keep shifting and changing at different speeds, micro narratives and disturbing juxtapositions unfold from the torrent of information, but then seconds later evolve into something else entirely. The bluntness with which these images pass us by only amplifies the perversity and crude violence contained within them. It’s a noxious yet exhilarating aesthetic, an unravelling malfunctioning Instagram feed of cats, children, festivals, violence, trauma, disease. All taken with an intentional, off the cuff and overexposed flippancy that evokes the early days of Vice magazine. It’s a film filled with anxious energy, a constant blurring of fact and fiction that holds a broken mirror up to what Hura sees as a ‘frighteningly fast-changing, post-truth world where actions are fuelled by appeals to emotion and facts are increasingly ignored.’ 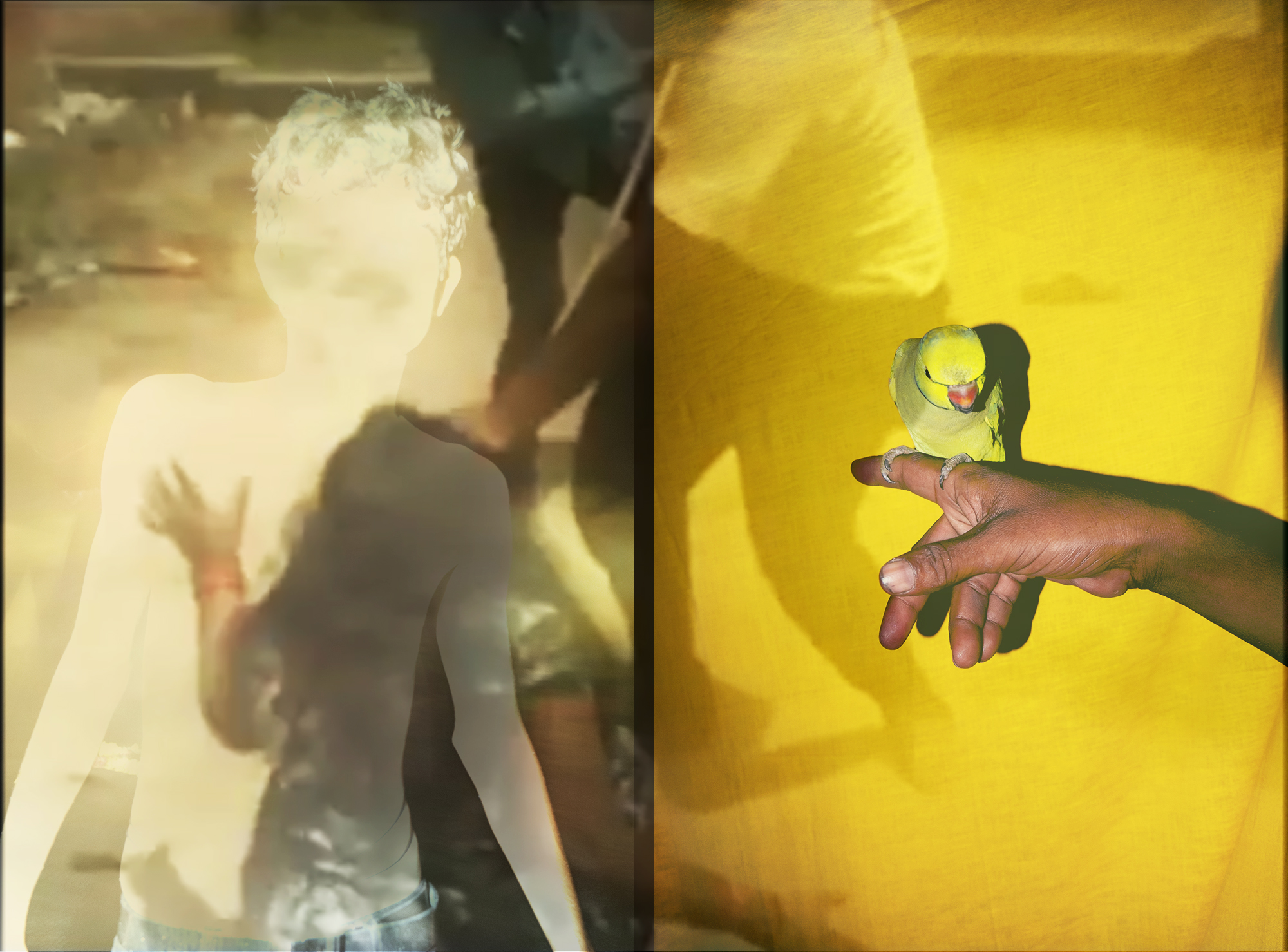 The Lost Head and the Bird, dir. Sohrab Hura

Winning best short film at this year’s Cannes Semaine de Critique, Jacqueline Lentzou’s Hector Malot: The Last Day of the Year unfolds with an enigmatic impressionism. It’s a film of great compassion and empathy that keenly feels the agitation, sadness and panic of its protagonist Sofia, who over the course of New Year’s Eve succumbs to a state of melancholic anxiety. In part channeling both the inscrutable heroines of Lucrecia Martel and Lewis Carrol’s Alice, who like Sofia is unable to fit comfortably into her surroundings, Lentzou masterfully articulates the deep-seated, unknowable and confused emotions that point inward towards some unspoken trauma.

Casting its gaze at the abundance of hydrangeas located on the Azores, Jorge Jácome’s Flores takes this natural phenomenon and spins out an ecstatic and sensuous hybrid of fact and fiction. Presenting a scenario that has forced the inhabitants of the islands to flee, two soldiers are tasked with monitoring the island which has been overrun by the aggressive purple hydrangeas. From this, Jácome creates a three part fanatasia that ruminates on the relationship between humans and their environment, offering a gentle critique of capitalism’s innate capacity to exploit disaster, whilst also containing a queerness that dually straddles yearning and machismo in the tradition of Jean Genet. Additionally the films air of wonder is amplified by its lavender hued photography and the hypnotic minimalism of Terry Riley’s score. 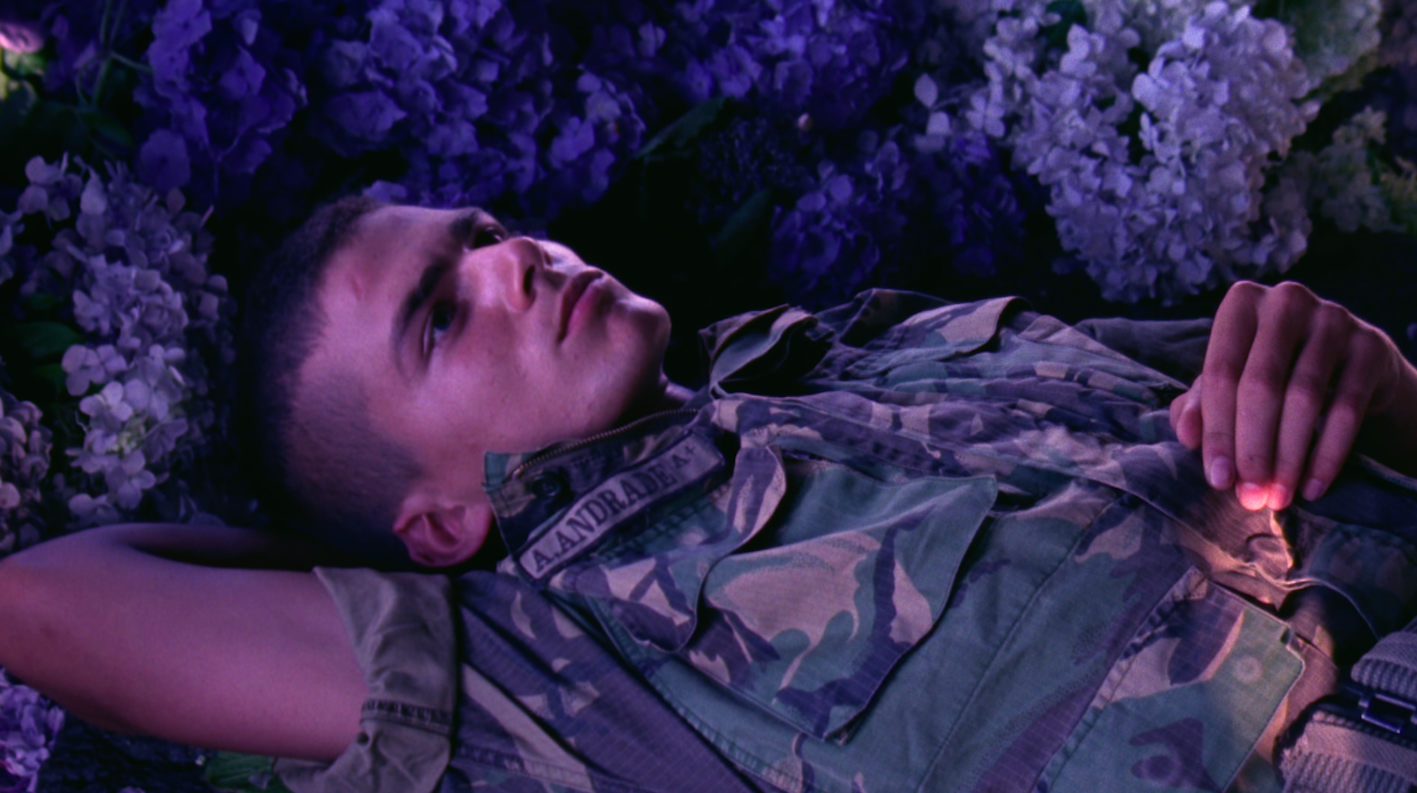 Whereas Jácome presented nature as concrete and manifest in its flirtation with documentary technique, in Sylvia Schedelbauer’s psychedelically coloured Wishing Well, the natural world is rendered with the slipperiness of a half-remembered hallucination. The film operates as a simultaneous push and pull through the recesses of childhood memories: the serene tranquility of its natural setting disrupted by the film’s pulsating flicker. Firmly embedded within the avant-garde tradition, Wishing Well, is both a beginning and an end, a retraction and a journey into the new, where time and space are constantly in flux. Above all it’s a film of great transport, offering both a journey into the transcendent, but also one of great physicality and remarkable sensory stimulation.

There are two films in this years international competition that utilise and interrogate the use of archival footage, Evidence of the Evidence by Alexander Johnston and Interregnum by Albanian artist Adrian Paci. In the former, Johnston uses never before seen video recordings shot during the 1971 Attica prison uprising and then the subsequent retaking of the prison. Filmed on the ground by a New York State Trooper using early home video recording equipment, the film serves as a visceral and disturbing artifact of institutional racism and violence, whilst also interrogating the means in which moving images distort and narrativize events as they unfold.

In Interregnum, the title of which refers to the period between two incumbent regimes, Paci stitches together footage from the public funerals of communist leaders such as Lenin, Stalin, Mao Zedong, Zhou Enlai, Josip Broz Tito, Kim Il-sung and Albania’s own Enver Hoxha, collected together from numerous official state and national television broadcasts. Through this he explores both the depersonalisation of the endless parades of mourners and also the performative ritualism of public grief, where the outwardly expressed and replicated displays of grief act as ‘earnest’ and legitimate support for for both the departed leader and the state itself. It’s a monumental achievement, intercutting between distant anonymous precessions and the close ups of stricken faces and limp bodies, thus uniting the individuals across space and time in collective suffering.” 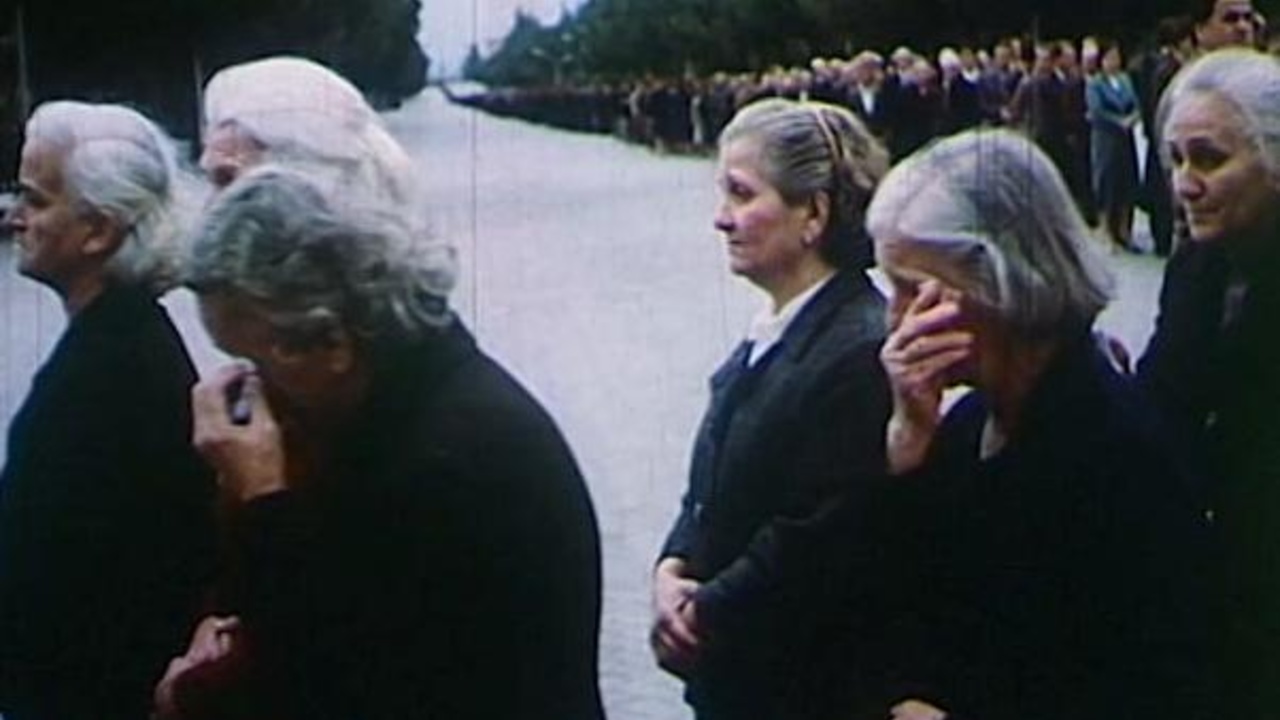