Next year will be our FOURTEENTH London Short Film Festival. LSFF's Jenna Roberts looks back at 13 years and 13 winners of our 'Best UK Short' award.

Next year will be our FOURTEENTH London Short Film Festival, and 13 years of LSFF means 13 winners of our ‘Best UK Short’ award.

Over the past month, we’ve been posting every LSFF winner since 2004 right through to today and catching you up with each filmmaker’s successes and triumphs since. In the words of our fest’s founder, Philip Ilson, “it’s great to see all the 13 winners of 13 years of the London Short Film Festival (nee Halloween Short Film Festival in 2004) here in one place as it’s a real cross section of UK based filmmaking talent, and a strong reminder of the sort of films that LSFF has been championing since it’s inception: daring, unusual, exciting talent, and it’s cool to be able to track them all with their projects and films since.”

Jump on #13YEARS13WINNERS to have a trawl through, OR we’ve rounded them all up here for your pleasure and convenience. It’s a long’ un, so strap in and take a figurative walk through LSFF history.

They say you never forget your first - and our first ever 2004 ‘Best Short’ winner, Nick Jordan’s Fury, is a film crafted to linger. In the words of our co-founder, Philip Ilson, it remains ‘perhaps the most experimental LSFF winner of ever,’ in fact setting the tone for the festival throughout our now 13 years and our enduring affinity with the obscure and esoteric.

In the 12 years since, we haven’t lost touch! Nick’s ‘Merzmongo’ placed in our Long Live Dada Short Film comp last month and screened at ICA London as part of our 100 YE∀ЯS OF DADA celebrations. Active since the early noughties, he now has a plethora of shorts under his belt, never waning in their experimentalism, and has showcased at arts institutions and film festivals around the world, from the Kunstmuseum in Bonn to the BFI’s London Film Fest to Paris’s Musée du quai Branly to Edinburgh IFF.

Throwing it back to 2005 (such early days for LSFF that we were still going by the ‘Halloween Short Film Festival’!), our second ‘Best Short’ winner was Glaswegian documentary filmmaker Jes Benstock’s ‘Orders of Love’, funded by the now defunct UK Film Council. Orders of Love sees Jes, newly a father, piecing through his family tree, asking questions of heritage and inheritance, inclusion and exclusion, identity and belonging. It’s both charming and no-holds-barred honest, and is one of those unique documentaries examining subject matter so personal it in fact reveals something universal and true of us all.

In the decade since, Jes has created commissions for ITV, the UK Jewish Short Film Festival and the 50th anniversary of the BFI’s London Film Fest, and has also recently made the jump over to features with his (really rather fabulous) Miss Alternative World doc, ‘The British Guide to Showing Off’.

IN PASSING, The Light Surgeons 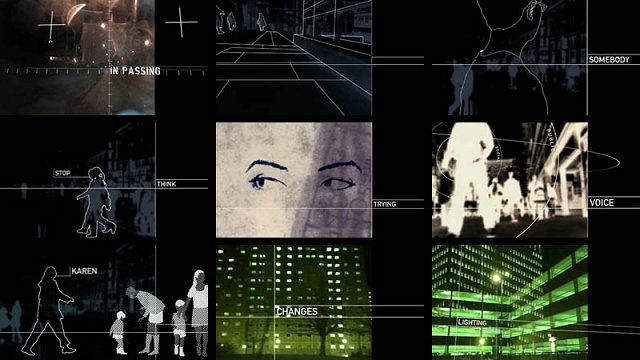 This duo wowed us with ‘In Passing’, an animation meditating on everyday lived experience when one of the things we assume makes us most human, sight, is inhibited. Since 2006, The Light Surgeons have found fame for their concert visuals & live AV installations, having created visuals for everyone from the BFI, Channel 4 to the Rolling Stones.

I WANT TO BE A SECRETARY, Sarah Wood

Our fourth year, and our last as the Halloween Short Film Festival, crowned Sarah Wood’s I Want to be a Secretary as it’s ‘Best Short’. Wood, given access to the Prelinger Archive, weaves found footage from 1950s secretarial how-to’s into an offbeat, feminist suspense with the bubbly voiceover of its pastiche secretarial heroine, the “working woman”, as she navigates the intriguing goings-on of the typing pool.

Wood, one third of the London feminist film collective Club des Femmes, we’ve considered a friend since the inception of the festival and still to this day a collaborator. Over the last ten years, Wood has moved between curator and filmmaker, with commissions from some of the UK’s most prominent arts institutions and further afield - perhaps her most influential work to date has been her ‘For Cultural Purposes Only’, a project with another found-footage focus working through the Palestinian Film Archive.

Our fifth year, 2008, was our first officially as the London Short Film Fest, and winner of Best Short went to Scott Graham’s ‘Shell’, a poignant short set in an isolated Highland petrol station, meditating landscapes and loneliness. The short itself, picked up by the BFI Film Fund and remade as Graham’s debut full length feature, has entirely disappeared from the inter-webs so we’re instead posting a link to the feature on the BFI Player.

Esther May Campbell’s ‘September’ was our sixth pick for ‘Best Short’, and saw an overlap with both Encounters Short Film Fest’s top prize ‘Best of British’, East End’s ‘Best Short’ award and won the BAFTA for Outstanding Short Film ‘09. Catch a montaged version of the short in all its dreamy glory, below.

Since, Campbell has only moved from strength to strength, directing TV episodes of the likes of Skins and Wallander, and her first feature ‘Light Years’ got its world premiere at Venice in 2015.

Our seventh winner was Belgian filmmaker Tom Geens’ You’re the Stranger Here, 2010, a lo-fi, sci-fi thriller filmed on crackling S-VHS. Described by one of our jury as both a ‘masterful’

showcase of filmmaking and ‘compulsively strange’, its narrative straddles the line between parody and dystopia, revolving around a fictional fascist government’s weeding out of ‘illegal leg spasming’.

Geens, now self-titled Head Chicken at the chickenfactory, has his fingers in many pies. He’s since made the jump over to features - his first, Couple in a Hole, released this year is equal parts jarring and beautiful, picked up funding from the BFI Film Fund and premiered at Toronto Film Fest to much acclaim. He’s also got a whole load of commercials under his belt, working with everyone from MTV to the Terrence Higgins Trust to IKEA.

Year 8 of the fest, 2011, saw Ruth Paxton’s PARIS/SEXY awarded our UK Film Council ‘Best British Short’, a powerful psychological drama funded by the now defunct Scottish Screen and developed through DigiCult’s ‘09 ‘Scottish Digital Shorts’ programme. The short itself is masterfully shot, all at once austerely surreal and brutally realist, its tragic heroine Greer’s isolation compounded in a palette of greys and claustrophobic close-ups. Mind games are abundant, there are no winners - in Paxton’s own words, in PARIS/SEXY, ‘dreams do not come true.’

In the years since, Paxton’s accolades have kept coming - in 2013, she was named in Canongate’s FUTURE 40, a list of Scotland’s up-and-coming predicted to dominate the next 40 years of storytelling, and went on to win our Best Woman Director award in 2015 for her film, PULSE.

The 9th London Short Film Fest saw the British Council award for ‘Best Short’ go to Andrew McVicar’s Compulsion, ‘11. Shot in just a fortnight but edited for over a year and premiered at the BFI’s London Film Fest, Compulsion is a deliberate antithesis to the saccharine teenage love story, instead an unsettling thriller - the rose-tint of teenage infatuation turning to disturbing compulsion, fuelled, of course, by Facebook and adolescent jealousy.

Since, Andrew has taken on the role of creative producer at [Third Films]( http://www.thirdfilms.co.uk/).). They were one of just 20 to receive a BFI Vision Award back in May ‘03, securing a £50,000 grant and have recently been crowdfunding for our winner no.6 (small world huh!) Esther May Campbell’s debut feature, Light Years.

Our tenth year was, of course, a special one for us - and our winning Best Short was a suitably mystical masterpiece to round off a whole DECADE of programming London’s very finest short films. Commissioned as a ‘Sigur Rós Mystery Film experiment,’ Nicholas Abrahams ‘Ekki Mukk’ sees Aidan Gillen on an emotional otherworldly journey through the English countryside accompanied by Tod the Fox and folk legend Shirley Collins in snail form. It’s both moving and gorgeous to look at - one of our 2013 jury even remembers the panel getting a little teary!- so be sure to have tissues to hand.

GETTING ON, Ewan Stewart

Our eleventh Best Short winner, Ewan Stewart’s Getting On, went on to sweep up awards from far and wide - from BAFTA Scotland’s Best Short ‘14 and Glasgow Short Film Festival’s Best Scottish Short to a special mention at Leeds International Film Festival and Malta-based Kinemastik International Short Film Festival’s Audience Award. A masterclass in social realism and the art of the voiceover, Getting On follows an especially ordinary day in an ordinary woman’s life - until the very extraordinary happens.

Ewan graduated from National Film and Television School with his MA in Directing Fiction the same year, and has continued to create shorts, most recently collaborating with composer Emilie Levienaise-Farrouch.

2015’s Best Short winner was The London Film School grad Simón Mesa Soto’s ‘LEIDI’ set in Simón’s home country of Colombia, following its eponymous protagonist as she waits for the father of her newborn to return home amidst the village’s whisperings. Leidi went on to sweep up Cannes’ Short Film Palme d’Or and toured over 20 film festivals worldwide off the back of this, establishing Simón as a reckonable talent and (as cliche a phrase it may be) ‘one-to-watch’ within the industry.

Returning to Cannes this year with his follow up ‘MADRE’, a portrait of a young sex worker from Medellín commissioned by Break The Silence, Simón continues to be a decisive voice in a pivotal moment of diversifying and overhauling a new cinema of Colombia.

Our 2016 winner was a truly European bringing together of filmmaking talent - a Russian, British and Czech co-production, seeing a collaboration between the London Film School, Prague’s FAMU and the SiberiaDOC development scheme, helmed by LFS grad Sofia Safonova and filmed in her hometown of Krasnoyarsk in Southern Siberia.

The short follows female bus conductress, Tamara, introducing her teenage son to the colleague she’s dating, which inevitably does not go well, son and suitor jarring. The film makes subtle comments on the interplay of gender, labour and our perception of ‘strength’ at this axis, as well as class and aspiration in the communities at Siberia’s peripheries, and ends with a pretty rousing karaoke number you definitely didn’t see coming. Safonova is one to keep your eye on.